In his paintings, Viktor tries to achieve a harmonious ensemble of order and coincidence. The order arises from a set of geometrical shapes and sequences, set up according to an inherent mathematical logic like the Golden Section or the Fibonacci numbers. This parallels the organizational principle of many natural phenomena; the way cells divide, structures develop, and complexity arises, follows a set of fixed rules. As a result, the patterns on Majdandzic ‘s paintings often have striking similarities to structures found in biology.

At the same time, these natural processes are characterized by a degree of variation and irregularity. In the early works, chaos was introduced by using random numbers to create an irregularly iterating pattern. In recent works, the flow of the paint over the geometrical structures and the way previous layers of paint shine through the layers on top create the “unexpected”.

Elaborating on the structural analogy between his paintings and physical processes, Viktor Majdandzic describes his paintings as an instance of “geology on a single squared meter”, where natural processes such as crystallization, erosion, and sedimentation interact. Crystallization can be recognized in the geometric forms and the rules they obey; erosion and sedimentation are represented by the flows and the sprinkles of the paint.

The irregularity adds a sense of uniqueness to the constraints of the structure. Thus, to Majdandžic, a painting is more than just a geometrical structure. It must possess balance, harmony and identity; the mathematical patterns have to “sing”. He achieves this by “unbiased” observation of the painting and (sometimes endlessly) adding new layers of paint and even new structures. In this intuitive process, the artist creates the constraints, after which the painting “creates itself”, by the flowing and merging of the layers of paint.

Embedded in life and geology

“As an artist I feel respect for the unique identity and the bodily integrity of a work of art. As a finite entity it reflects the pertinacity of life embodied in a finite organism that is again embedded in nature, specifically in geology. Trying to ponder the ontology of life I recognized that patterns are the basic primitives of its structure.

These patterns crystallize and dissolve, accumulate and interchange, replicate and recombine, stabilize and diversify, endure and dissolve, in touch with the warm breath of entropy. I began and kept on representing those patterns in my art with structures derived from three manners of sequencing squares. These structures, with their intrinsic logic and stabile growth, resemble crystals in geology. The flow and sprinkles of the paint, then, resemble the geological processes of erosion and sedimentation. Although the structures seem rational, their combination in a particular painting is intuitive. The flows and sprinkles of paint are powered by gravity and open-ended. The structures and process models have to submit to the laws of pictorial composition, creating the identity of a particular painting. Therefore I do not experience a painting as an expression of myself.

Rather than expressing myself, I feel like an ascetic who is mumbling prayers of useless knowledge of the what and how of the world, bound to an identity that I consider a point instantiating eternity.

After all, the soul of a painting, I believe, is beauty, which is also a direct expression of the conditions of liveliness, both of living organisms and of their environments.”

A model for visual perception: interplay between concepts and immediacy

“My paintings constitute an interplay between discontinuity and continuity in perception, represented by geometric structures on the one hand, and the flow and the sprinkles of colored paint on the other hand.

The geometrical forms and sequences can be seen as visual concepts, that is, reusable “templates” to support visual perception. These visual concepts are both limiting, as they specify the restrictions of a certain flow of information, and unlimited or “empty”, since they can encompass an infinite number of instances. Therefore, the concepts have to be continuously “recharged” with reality when one is dealing with the world.

In my paintings, such visual concepts – for example, three different ways of sequencing squares (central, diagonal, and aside each other in the golden section) are broken down into primitives. These simple patterns constitute the “building blocks” for perception, like the phonemes and words of a spoken language. They are combined into a pictorial composition, providing the painting with a unique identity.

A second process, represented by the flow and sprinkles of the paint, adds a dimension of surprise to the painting. In this way, the perceptional process now taps also into intuition or “biological wisdom”, and emotion, which is a signal of a high degree of “immediacy”. In my works, emotions may arise from the colors and the “immediacy” of the painting process – whether this is fire or ice, singing or crying. These intuitive processes are, as in real life, longing for a “safe home of logics”.

The assembly of all these structuring and spontaneous processes is meant to provide a painting with both a perceivable “concept-network” and an ontology that can convince the senses.

Since our consciousness is embodied in a body, which needs to move, its capacity to apply structure to space and time is a survival issue. In perceiving the world around us, our senses are continuously attempting to detect an underlying order in it. In this way, we can make predictions, and thus interact effectively and flexibly with our constantly changing environment. To be able to trust the world (and ourselves), we create an ontology of what we perceive, a self-identity, and a sense of continuity.

My paintings are just as life: embedded in geology, displaying processes of erosion and sedimentation. Furthermore, they present the simple structures from which our visual system constructs an image – which is a continuous process of “intelligent design.” 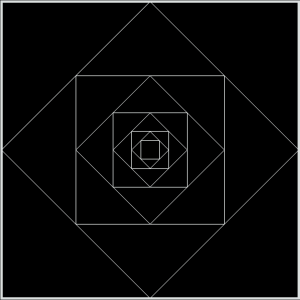 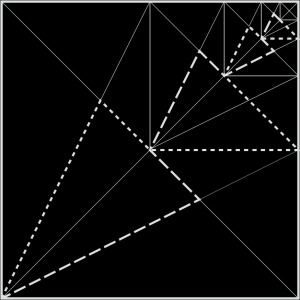 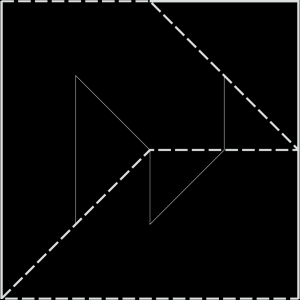 Structure from lines and diagonals of squares 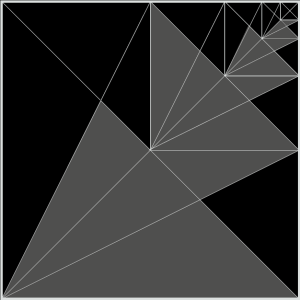 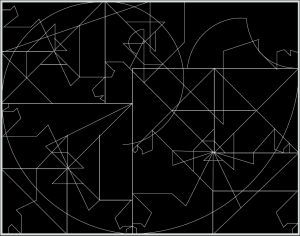 Line structures of a painting with different square structures within a spiral, based on square root of Golden Section 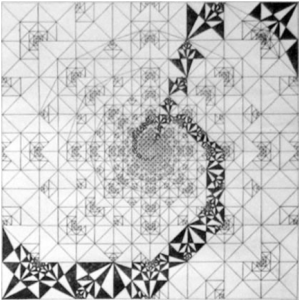 Complex structure based on square in square (1969) 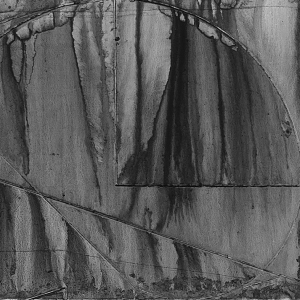 Detail of a painting